Investing during recessions and bear markets

Hearing “bear market” and “a recession is coming” strikes fear in many investors' hearts. This, combined with the fact that all that news outlets, investing websites, subreddits, and YouTube channels have to talk about in these times is how the market is in a bubble and why stocks are going to crash by 50% or more, could make any investor feel the jitters.

However, let's tune out the noise and try to take a rational, data-backed, and step-by-step analysis of what bear markets are, how long they last, how recessions affect markets, and how you as an investor can combat these conditions.

What are bear markets?

Generally, a bear market is defined as a prolonged period of price declines in a stock or an index (which consists of a basket of stocks). We have entered a bear market when the price of a stock/index has lost 20% or more of its value from a recent high.

However, the term “bear market” in practical use is used to denote the fall in value, of over 20%, of indexes such as the S&P 500 or the Dow Jones Industrial Average, which investors across the world follow. 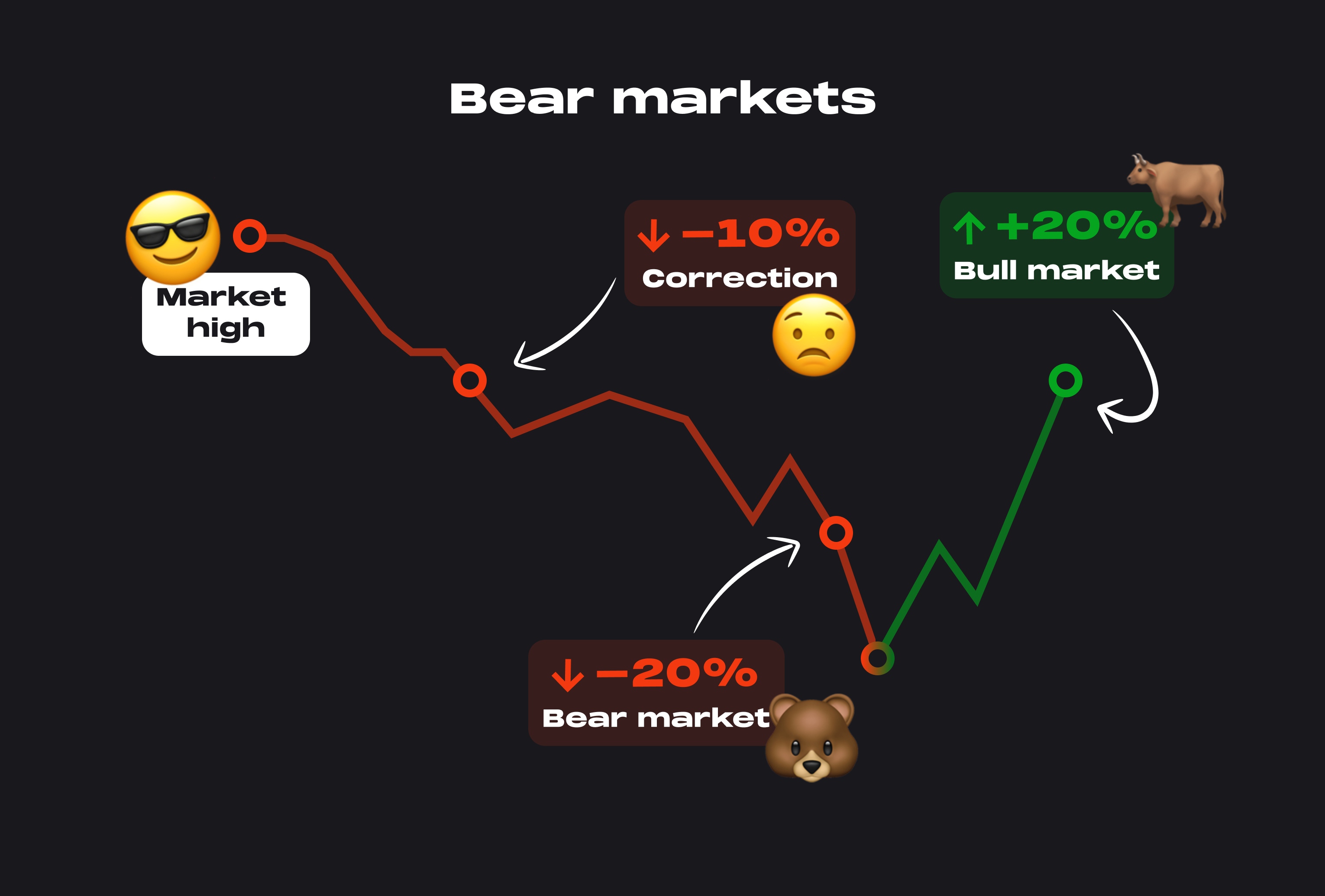 Since the market is forward-looking (which means it tries to anticipate future events instead of focusing on those that already occurred), bear markets often occur during periods of economic uncertainty. Investors become more risk-averse and pull money out of stocks and into safer instruments such as fixed income and gold. Market prices will fall when money is removed from financial markets, especially when there are no new buyers due to fear and uncertainty.

In general, bear markets denote that there may be a slowdown in the growth of an economy or that a recession is looming around the corner. They may be caused due to political unrest, persistent and high inflation, high consumer/corporate debt, etc.

What is a recession?

A recession is an economic term that describes a significant decrease in economic activity in a particular region or country. A recession is declared when an economy's gross domestic product (GDP) falls continuously for two consecutive quarters.

During a recession, the economy is in bad shape. Companies make fewer sales as people reduce spending, unemployment skyrockets as companies cut costs, and the company's economic output declines. Recessions are considered healthy and a normal part of the business/economic cycle as the cycle moves from peak to trough.

During a recession, the availability of cash as credit disappears, and unemployment rises due to cost-cutting initiatives by businesses. When many people are out of work, an economy spends less as many members aren't earning money.

When public consumption of goods and services goes down, inflation also cools down due to a lack of demand. This reduces the profits of businesses and leads to more job cuts which cause a further slowdown in the growth of an economy.

Why bear markets and recessions are necessary

Bear markets, as discussed above, generally occur when investors are uncertain about the economy's future and anticipate a recession. A recession can cause dire consequences such as rising and high unemployment, losses for businesses and investors in financial markets as prices of assets decline, a lower standard of living, increased taxes to cover government spending, etc.

However, some beneficial consequences also happen due to a recession in the economy. These include:

How long do bear markets last?

No one knows precisely how long a bull or a bear market will last. Bear markets are caused due to a wide range of reasons, including recessions, wars, problems in the housing market, unrealistic stock market valuations, and so on.

However, we can look at historical data to see how long bear markets tend to last and how far they decline using an example of the S&P 500 index, which consists of the top 500 publicly traded companies in the US, weighted by market capitalization.

If we look at the years between 1947 and 2022, there have been about 14 occurrences of bear markets. The longest bear market lasted around 20 months, while the shortest lasted just one month. An analysis by Bloomberg found that the average bear market causes a decline in the S&P 500 by 32.1%, while the steepest drawdown was about 51.9% from the market high. 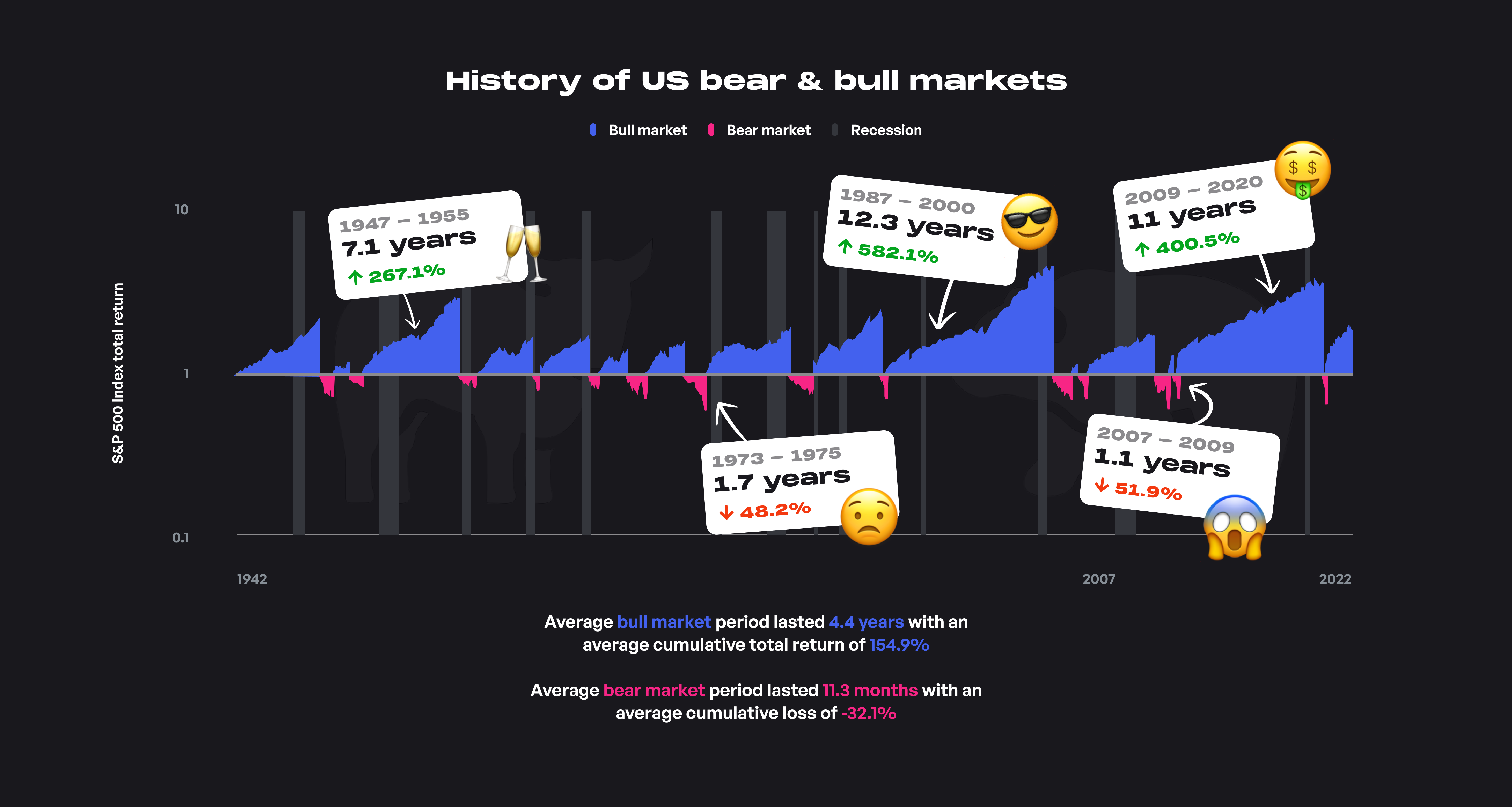 Although we don't know precisely how much markets will drop during a bear market, looking at the past, we can see that the two worst bear markets for the S&P 500 in history were during recessionary periods. During three other instances, the bear markets began before a recession was officially announced.

These worst bear markets were during the Great depression of 1929, when the markets dropped by 89% in value, and then during the 2008 financial crisis, which lasted for 1.3 years, and caused a drop in the S&P 500 of about 52%.

What to invest in during bear markets and recessions?

Bear markets and recessions are expected and sometimes even healthy occurrences in the financial markets and the economy. Just because there is a bear market or a recession around the corner (which is extremely difficult to predict or take advantage of), it doesn't mean that you have to deviate from your plan. 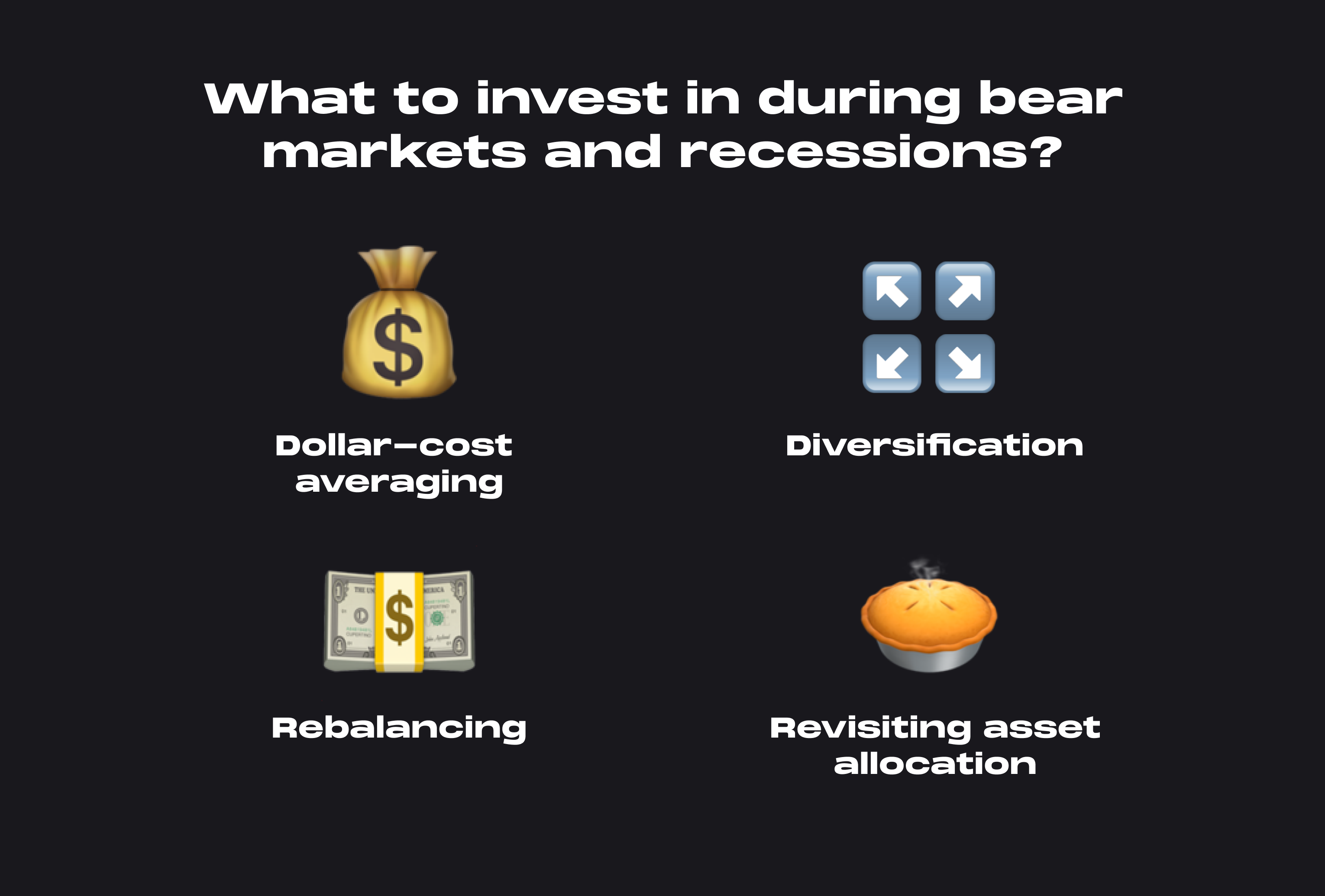 Following the principle of dollar-cost averaging, where you invest a set amount of money into your investment portfolio at regular intervals (usually monthly), can help reduce the average cost of your investments as prices are lower during bear markets.

Buying assets at depressed prices during bear markets can improve your overall returns in the future. DCA also ensures that you buy more units/shares when prices are low and buy less when prices are high as you are investing similar amounts on a routine basis.

Diversification across several asset classes such as stocks, fixed-income, real estate, gold, cash, and so on can help you navigate the volatility of bear markets when a particular asset class performs poorly. Other asset classes might stabilize your portfolio by remaining unaffected or increasing in value.

Diversification within asset classes is also necessary as it helps you negate all other risks associated with particular companies or organizations and exposes you only to the risks of the entire market. For example, allocating the equity part of your portfolio to low fees, broad market, market-cap-weighted index funds will provide you with the necessary diversification such that you are exposed only to market risk that cannot be diversified away.

Rebalancing can help you buy low and sell high as you sell your investments that have risen in value recently to meet your target allocation and buy other asset classes that have fallen in value to maintain the desired allocation.

Bear markets are an excellent time to revisit your asset allocation and check whether your portfolio serves its purpose. If the fluctuations are too large for your liking, and if you are constantly worried about your portfolio, it may be a hint that you should consider restructuring your allocations to various asset classes.

Suppose you feel like a recession or a bear market is around the corner, and you must take action. In that case, you can increase allocations slightly towards more recession-proof asset classes such as gold and invest in companies that operate in defensive sectors such as utilities, consumer staples, and healthcare.