Understanding money and its history

Money. We pursue, spend, save, invest, and dream of attaining more of it.

But what is money, and how did it come into being? The history of money is a fascinating journey that spans millennia, from bartering shells and animal skins to our modern monetary system and digital currencies.

Understanding what money is, how it came about, and the characteristics necessary for each form of currency to succeed will help you understand the psychology behind money and further optimize your investment strategies.

Tens of thousands of years ago, people used the barter system to exchange goods and services for other goods and services. Say you were a cobbler and needed food: you could trade your shoes to any farmer who wanted them in exchange for food.

The bartering system, of course, had its limitations. If you wanted apples but were a cobbler, you could only go to apple farmers who were willing to accept shoes at that moment. This system was inefficient as there was no intermediary (medium of exchange) through which two parties could exchange goods and services. People could only trade with those who had the goods or services they sought, and this transaction could take a long time — if it occurred at all.

The barter system was phased out and replaced by cattle and crops around 9000 to 6000 BC. The earliest forms of money included cattle like cows, sheep, camels, and grain such as fruits, vegetables, and other plants.

As grain or cattle had an immediate use case, most people were willing to accept payment in these forms. However, handling large quantities of crops and cattle was a logistical nightmare. There was also the problem of storing the harvest and feeding the cattle, as the crop was highly perishable and the animals were difficult to keep.

It was around 1200 BC that Cowrie shells (mollusk shells) were used as a form of money because they were small, durable, similar in size, and limited.

The cowrie has been the longest-standing and most widely used currency. Found in abundance across the shallow waters of the Pacific and the Indian oceans, these products didn't face the same logistical and practical issues as cattle and crops.

Several other groups across the world use sea-related items, including smooth beads, whale teeth, and sheets of limestone (still in use today), as a form of currency.

While the Babylonians used metal in their money as early as 2000 BC, the Chinese introduced metal money as a medium of exchange around 1000 BC.

The first metal money came in the form of knives and spades, and over time these primitive tools evolved into round coins. Often, these coins had holes you could string together to form chains. This period also saw China produce bronze and copper imitations of cowrie shells.

Animal hides and leather were used as currency around 600 BC. The Chinese emperor Wudi (who reigned from 141–87 BC) made money from his collection of white stags with one-foot square pieces of deerskin. Fun fact: the term “buck” as slang for money is thought to be traced from this form of money.

The first paper banknotes appeared in China in 800 AD. Until the 15th century, China was the only civilization that had paper currency. Paper currency was then given up in the middle of the 15th century and would not be used again until several centuries later.

Gold and silver have intrinsic value, but fiat currency (like paper money) has no intrinsic value and is easy to create at will. This excessive printing of currency was done by several countries, resulting in their currencies becoming worthless.

There were, however, some disadvantages to this system as well. Since many major and emerging economies linked their currencies to gold, the economic problems of a particular country could be exported worldwide. This linkage to gold causes inflation, economic growth, and financial stability to become more volatile under the Gold Standard.

Governments began rethinking the gold standard after the Great Depression (1929-1939). The Gold Standard was phased out by the 1970s. We explain why gold and currencies are delinked in our article about gold.

Finally, we reach the modern monetary system, which exists as electronic digits on a screen and is based on credit and debt. In most sovereign countries, money is printed by the government, and the government spends, borrows, and taxes the money itself.

A central bank (like the Federal Reserve in the U.S.) can print money and raise or lower interest rates to deal with macroeconomic issues.

American cryptographer David Chaum invented the first anonymous digital money in 1983, called Ecash. Ecash was completely anonymous and untraceable by anyone, including banks and governments.

The first decentralized currency - Bitcoin - was created by an anonymous developer named "Satoshi Nakamoto" in 1999. El Salvador became the first country to accept Bitcoin as legal tender in June 2021.

The functions of money

By understanding how money evolved through the ages, we can attempt to understand how an excellent monetary system functions. These functions are the core of any sound economic system and are visible in the different forms of money across the ages. Throughout history, money has served three main functions: 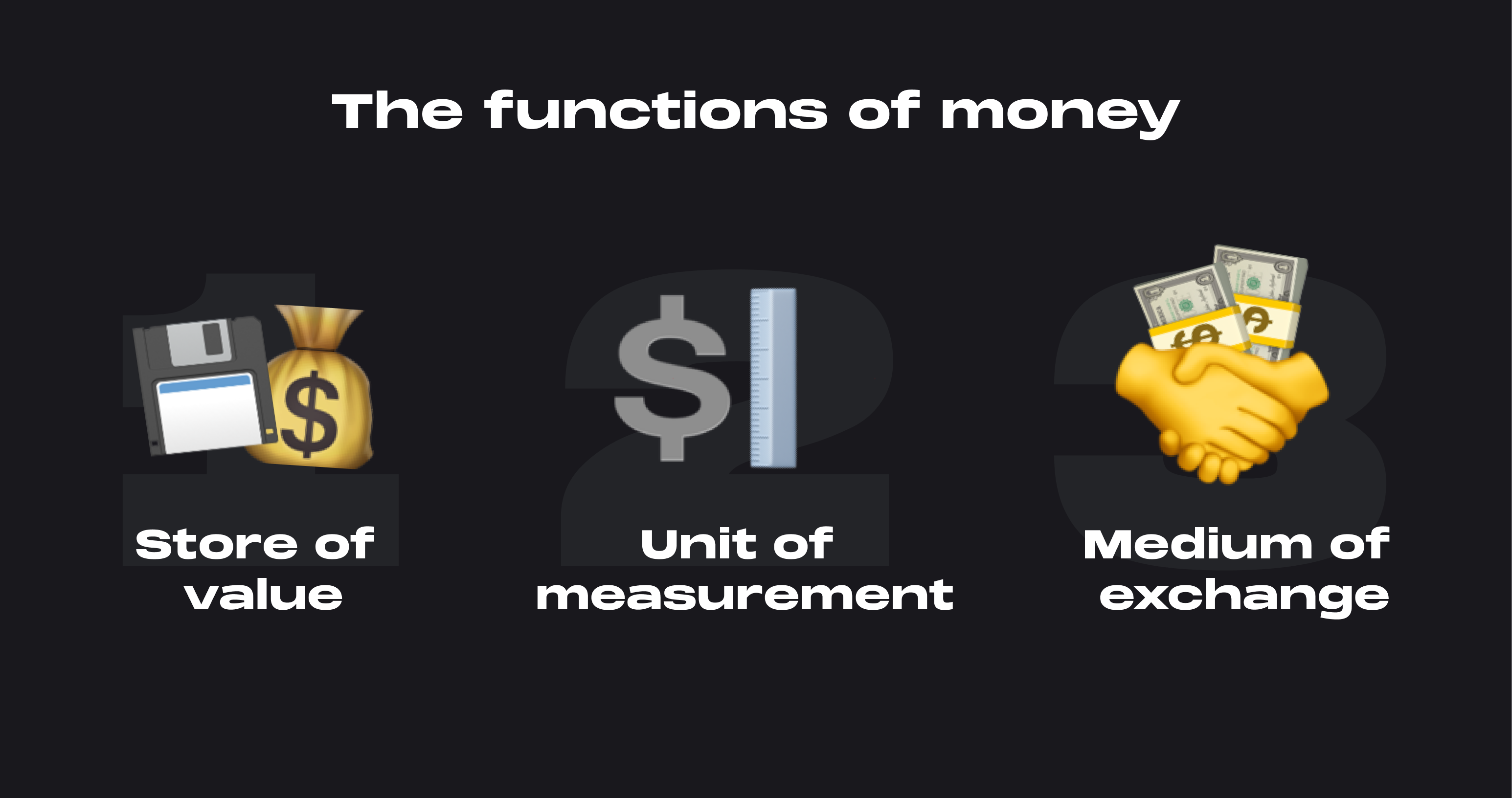 There should be no rapid decrease in the value of your money tomorrow, next month, or even next year. The system should be able to store and reliably allocate capital. Money today should remain valuable until exchanged for goods or services.

For example, during the days of the barter system and using cattle, grain, and shells as currency, the value of these goods as money could fluctuate widely based on supply and demand. Hence, they were not very reliable stores of value.

Moreover, the concept of a "store of value" helps you save money to use later without worrying about its value diminishing considerably. The modern monetary system, however, encourages economic growth and spending, so inflation reduces the purchasing power of your money every year by a certain percentage. When inflation is high, cash loses a lot of its purchasing power.

Money should also be a valid unit of measurement or account that people can use to quantify the value of economic transactions. In the days of barter, you had to understand how many wheat bushels equaled one goat.

Fortunately, today everything is valued in currency, so this problem is avoided. It is also essential that a unit of measurement be divisible, fungible, and measurable. Simply put, it should ease the exchange of goods and services between different parties.

The initial forms of money, such as cattle and grain, were not very good units of measurement as they were not easily divisible, and each crop or cattle was different from the other (not fungible). Comparing those earlier forms of money to modern currency, it is evident that trade is made much easier with modern money.

Finally, money should be widely accepted as a medium of exchange. A person entering a store should be able to purchase any number of items using money as an intermediary. Knowing that the person on the other side will accept your money as legal tender should help facilitate trade.

In contrast, the earlier forms of money (barter system, cattle, crops) were not suitable mediums of exchange. The willingness to accept these forms of money depended on whether the seller needed the specific form of goods you were offering.

Modern financial planning & investment management. Get early access and help shape the product by dropping in your email address.