How to make gold part of your investment strategy

For a long time, gold has been an investment that people held to help reduce the effect of inflation on their purchasing power and as a safe haven during times of recessions. Historically, gold has been used as a medium of exchange, which means people widely accepted gold in exchange for goods and services, just like today's currencies.

Gold was also backed by several of the world's most powerful countries, such as Great Britain and the United States. Even in modern finance, due to its scarcity and prominent use in jewelry, gold has increased in value through the decades and served as a hedge against crises.

A brief history of gold

Gold is considered the earliest metal ever employed by human beings as there have been small traces of gold found in Spanish caves dated to 40000 BC during the Paleolithic period. Gold is also the easiest metal to work with and is the most malleable of all metals; and was used to make ornaments, thereby increasing its value and appeal.

Gold, due to its glittering and appealing nature, was synonymous with beauty and served as a proxy of power to the wealthy and influential classes. Therefore, even before gold was used as a currency, it had immense value.

The first recorded usage of gold as a currency was by Darius the Great of the Persian Empire in 500 BC. From then until the 1930s, when depressions across the globe and in the US culminated in the US government passing a bill that made it illegal for citizens to hold most forms of gold due to excessive hoarding of gold by citizens, the value of gold was tied closely to the value of currencies.

Gold in the modern monetary system

On July 1, 1944, while the second world war was being fought, around 730 delegates from 44 Allied nations gathered together at the Bretton Woods conference to rebuild the international economic system. This conference was where the 44 countries attending agreed to peg their currencies to the US dollar, which would be exchangeable for gold at 35 US dollars for every ounce of gold (since the US had two-thirds of the world's gold reserves).

In its initial days, this system worked as intended and helped the post-war economies of Japan and Europe. However, in the 1960s, European and Japanese exports started becoming more and more competitive, decreasing the need for dollars and increasing the desirability of converting dollars to gold.

To make a long story short, military spending, foreign aid, rising inflation due to an increasing amount of dollars in the system, increased pressure of converting dollars to gold, and many more factors resulted in the Nixon shock, where President Richard Nixon announced that the US government was going to end the convertibility of dollars to gold, thereby severing the tie between the value of currencies and gold.

(You can read more about the Nixon shock here, here, and here.)

Gold as an investment

Even after the decoupling of gold from the dollar, the value of gold didn't take a hit at all as people continued to believe in the scarcity of gold and held it as protection during crises. Investors also continued to buy gold to diversify the risks in their portfolios.

The chart below shows the price of an ounce (28.34 grams) of gold from 1980 to 2021 in USD. Since 1980, gold has given a Compound annual growth rate (CAGR) of 4.85% with a volatility of 18.74%. However, from the year 2000 onwards, gold has delivered a CAGR of 9.05% with a volatility of 17.01%. This rally in gold prices was driven primarily due to several periods of crisis, such dot-com crisis, the 2008 financial crisis, and the 2020 COVID crisis (gold generally increases in value during periods of crisis). In and of itself, gold has proven to be a solid investment and a valuable asset during periods of crisis in the economy.

But how has gold performed compared to other asset classes? To show this, let's compare the performance of gold as an asset class to that of the S&P 500, which consists of the 500 largest publicly traded US companies weighted by market capitalization. We have to note that the US economy has performed exceptionally well in the last few decades. This level of performance in the equity market is unique, so we'll compare the performance of gold vs. both the US stock market and the Japanese stock market. 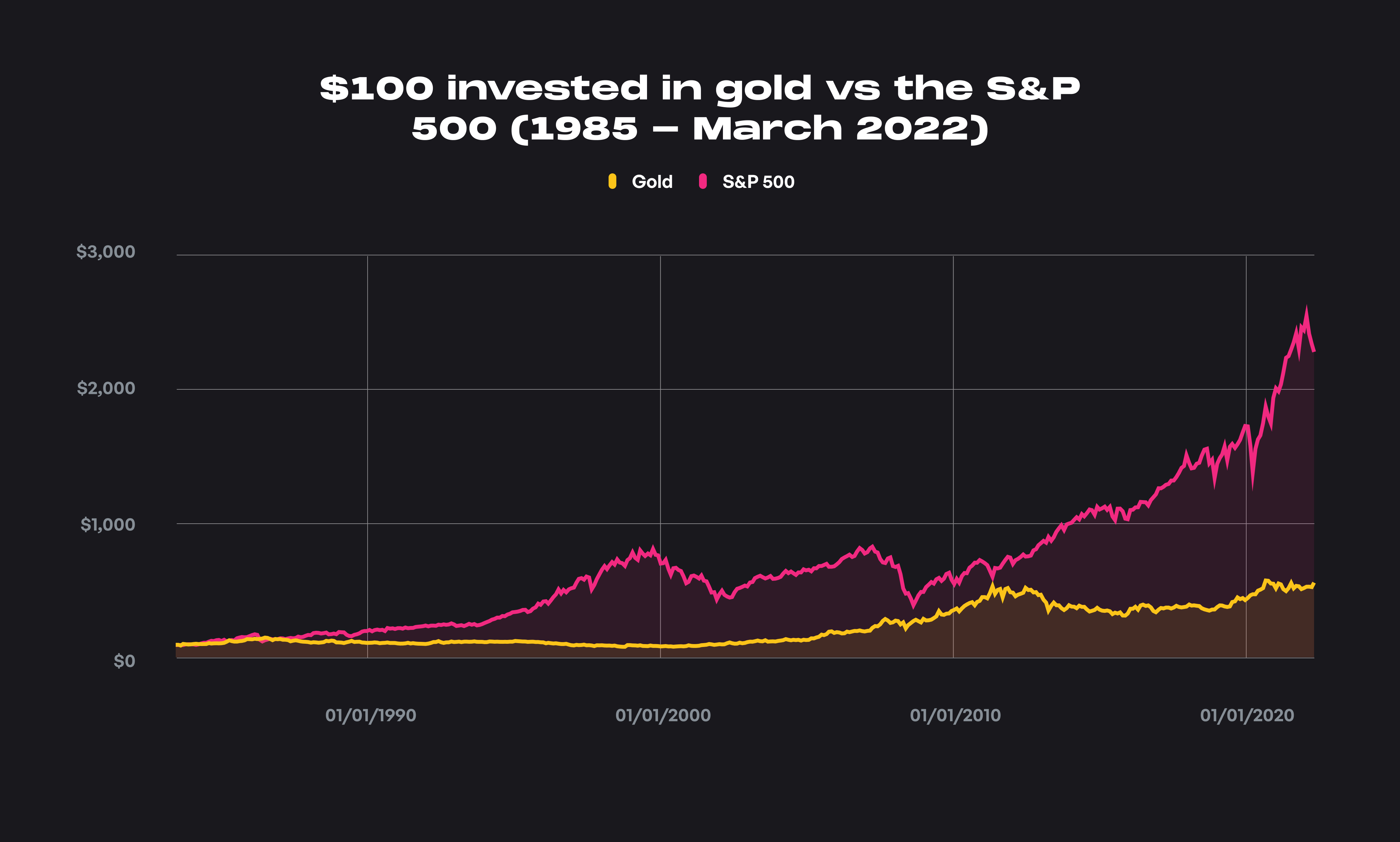 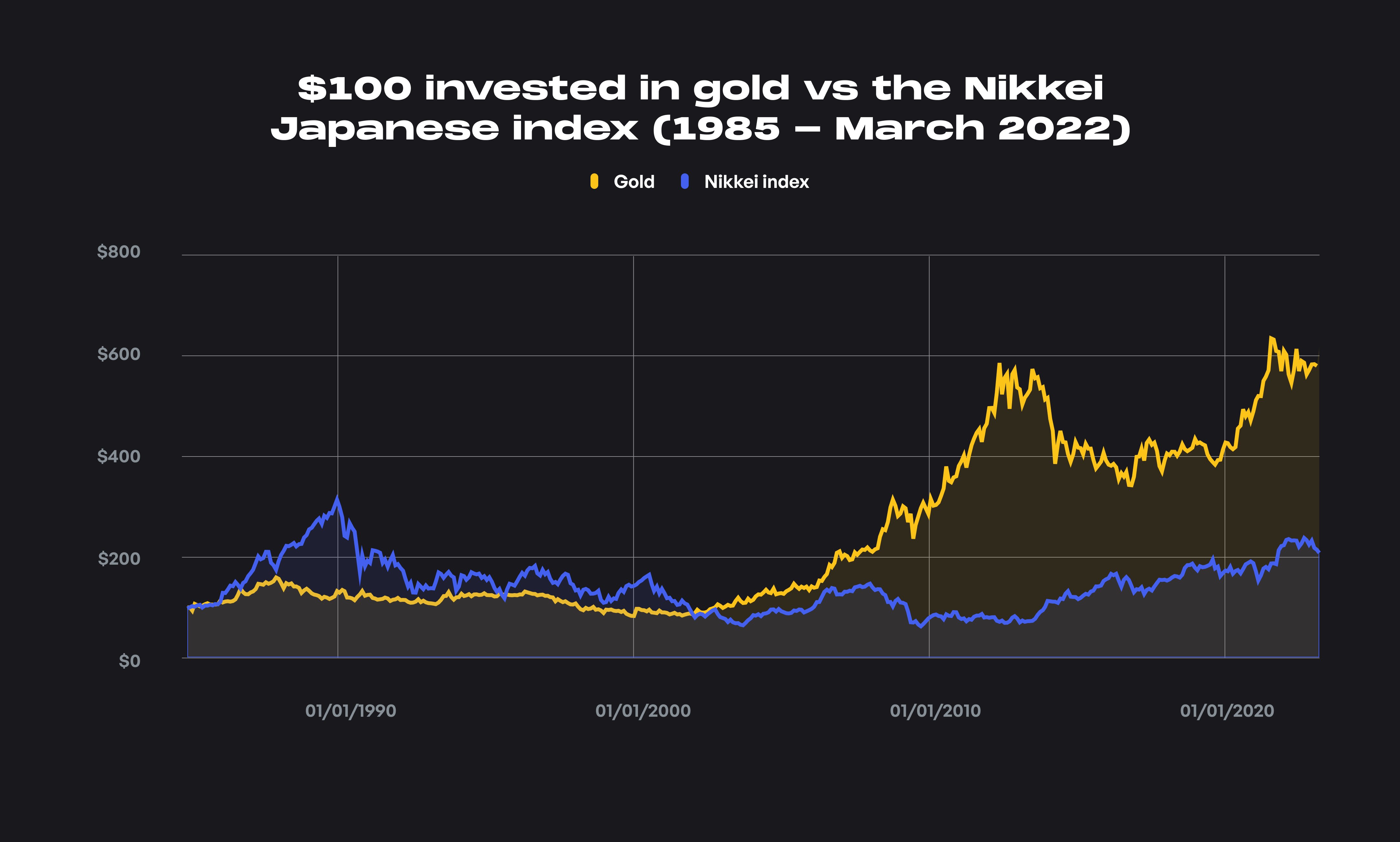 Now let's compare the performance and volatility of gold versus both the indexes in a small graph. The graph below shows the differences in performance between the two stock indexes compared to gold with respect to annualized returns (CAGR) and volatility. 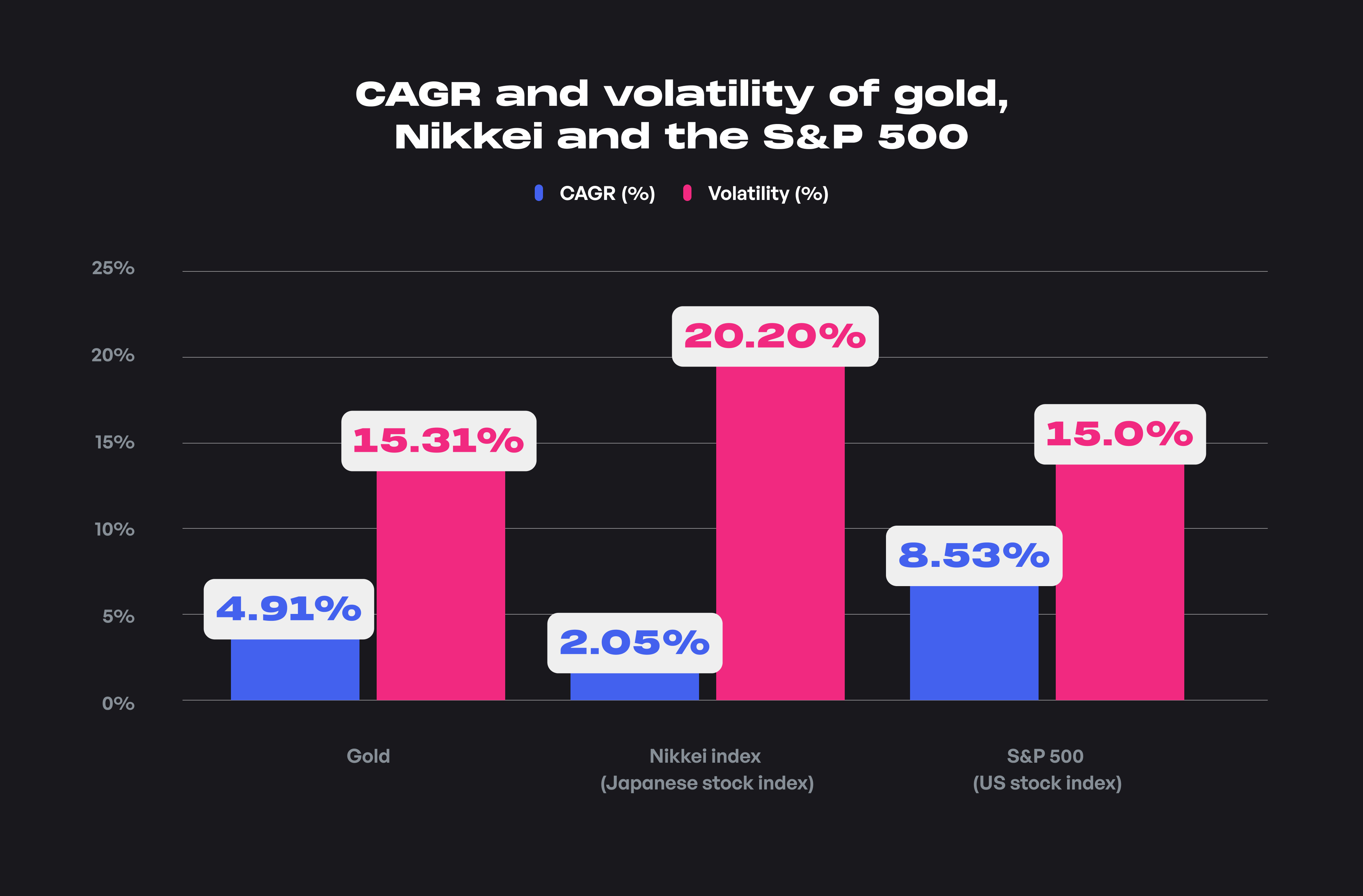 You can also look at how volatility plays out across the indexes compared to the volatility of gold. Looking at the fluctuations of each index with gold, we can see that volatility has been higher than gold in the case of the Japanese market, but the US market so far has shown lower volatility than gold. 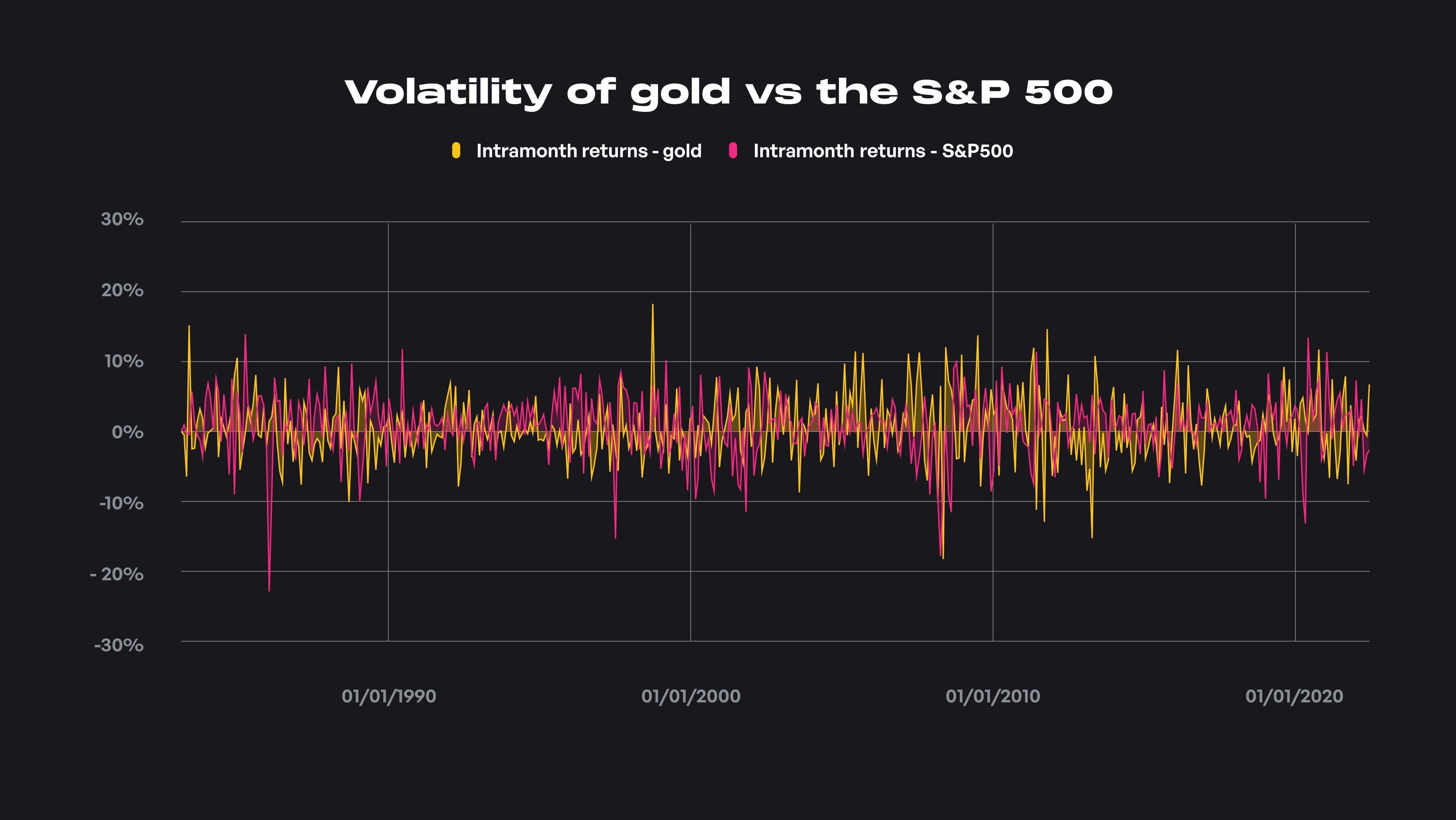 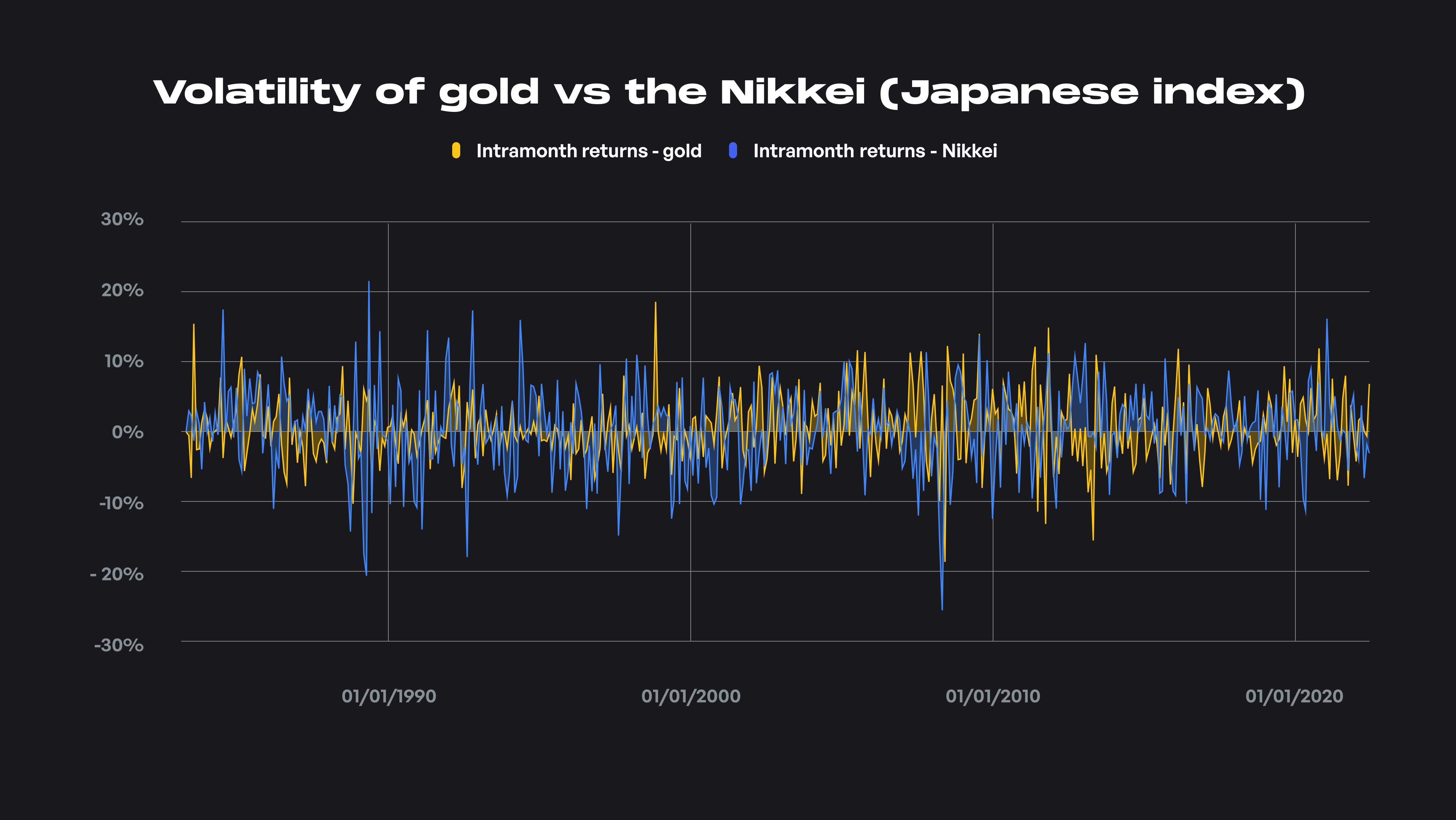 (To see the data, graphs, and analysis mentioned throughout this article, you can also visit the sheet here.)

During recessions and other periods of crisis, investors flock to gold as a way to safeguard their investments. Even though gold is widely seen as a way to reduce the volatility of an investor's portfolio, let us look at what the data has to say concerning the performance of gold during crises situations.

The dot-com crash occurred after massive speculation in internet-related stocks pushed prices higher and higher, resulting in an enormous run-up in stock prices, resulting in a stock market crash. 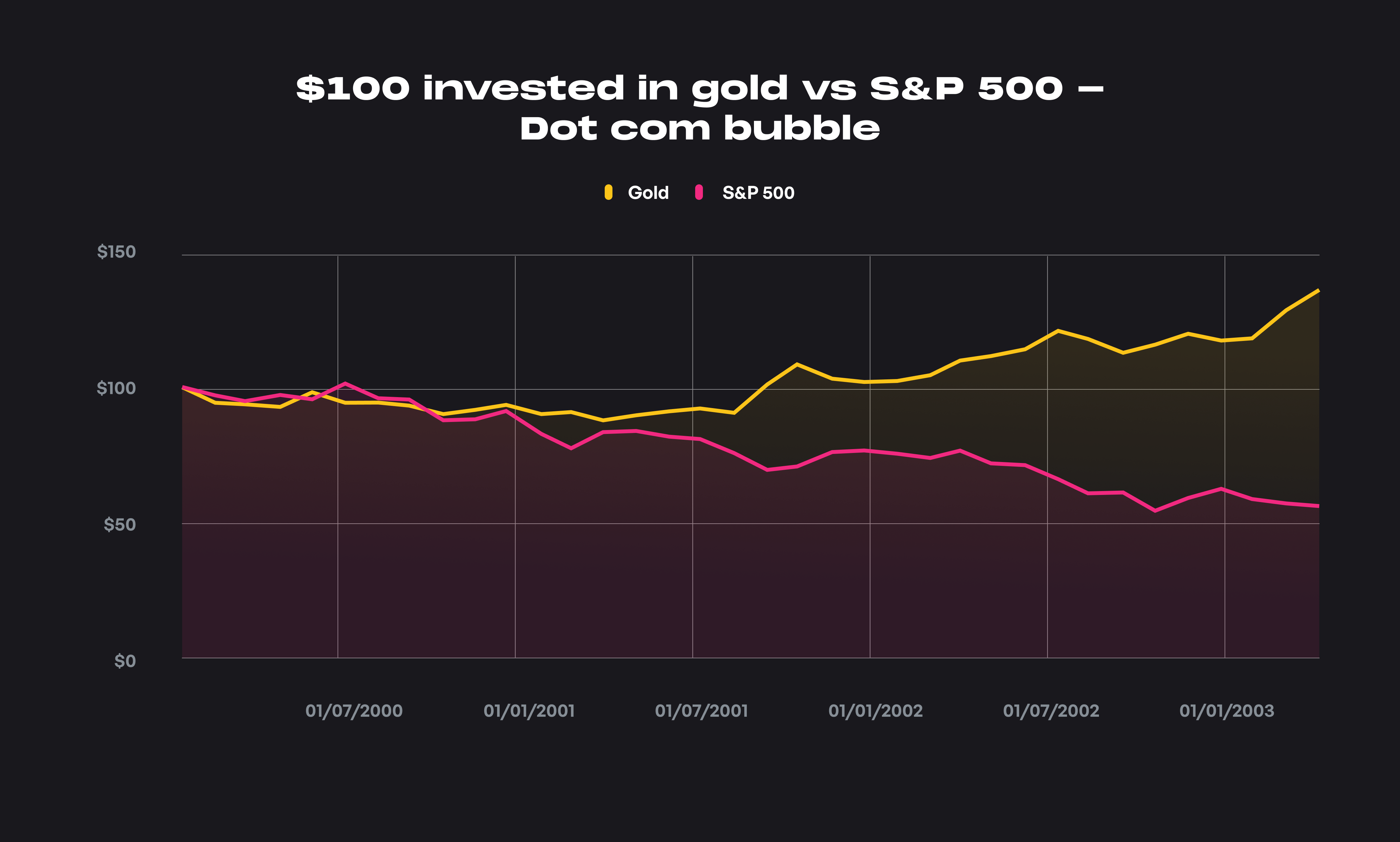 The financial crisis fueled by cheap credit and lax lending practices resulted in a global shock to the economy and the failure of several banks. This crisis led to a crash in stock prices as investors pulled their money out of the market. 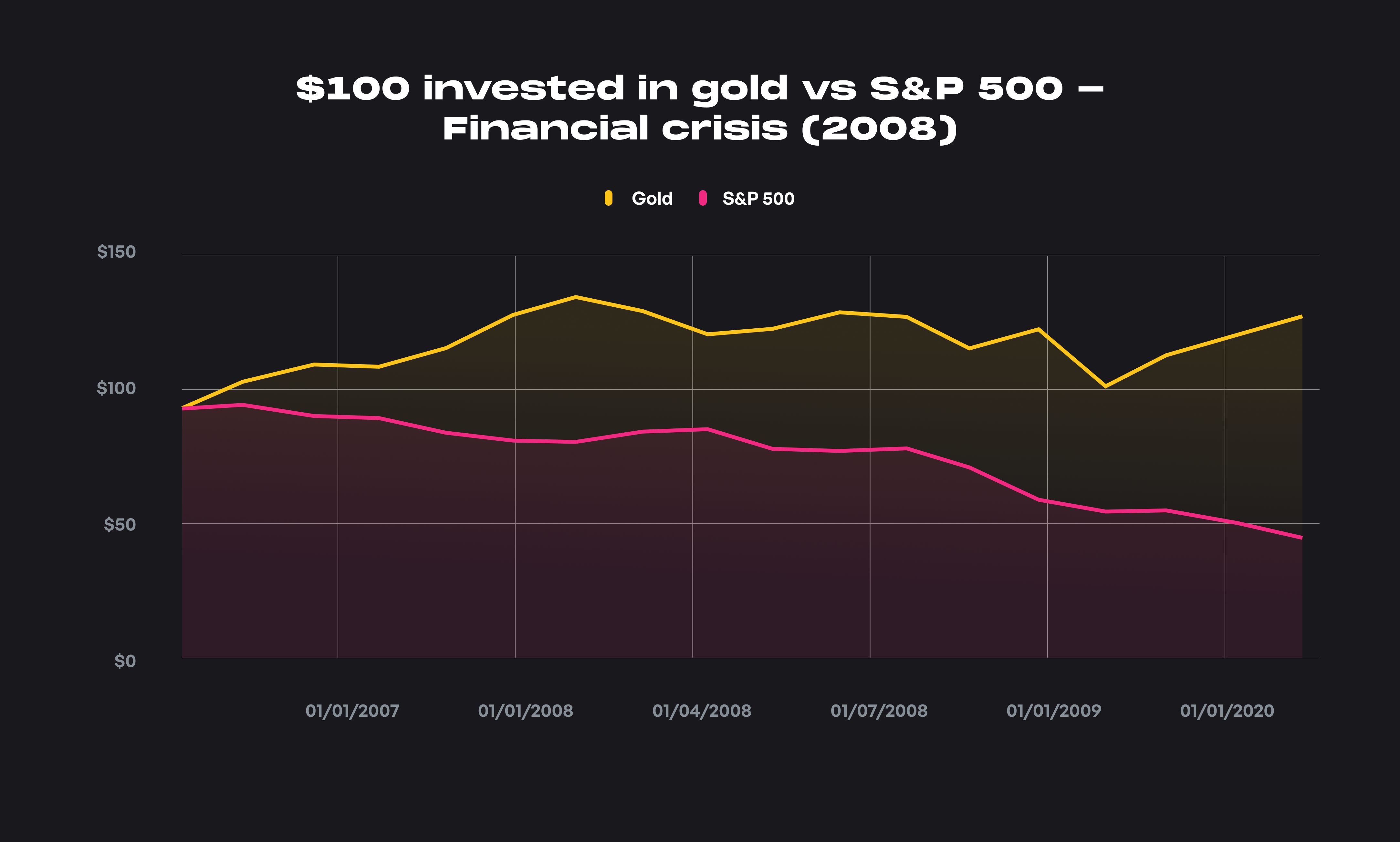 The coronavirus outbreak across the globe resulted in a sharp correction in the stock market. Investors, in their panic, sold off positions heavily, resulting in an abrupt crash in the financial markets. 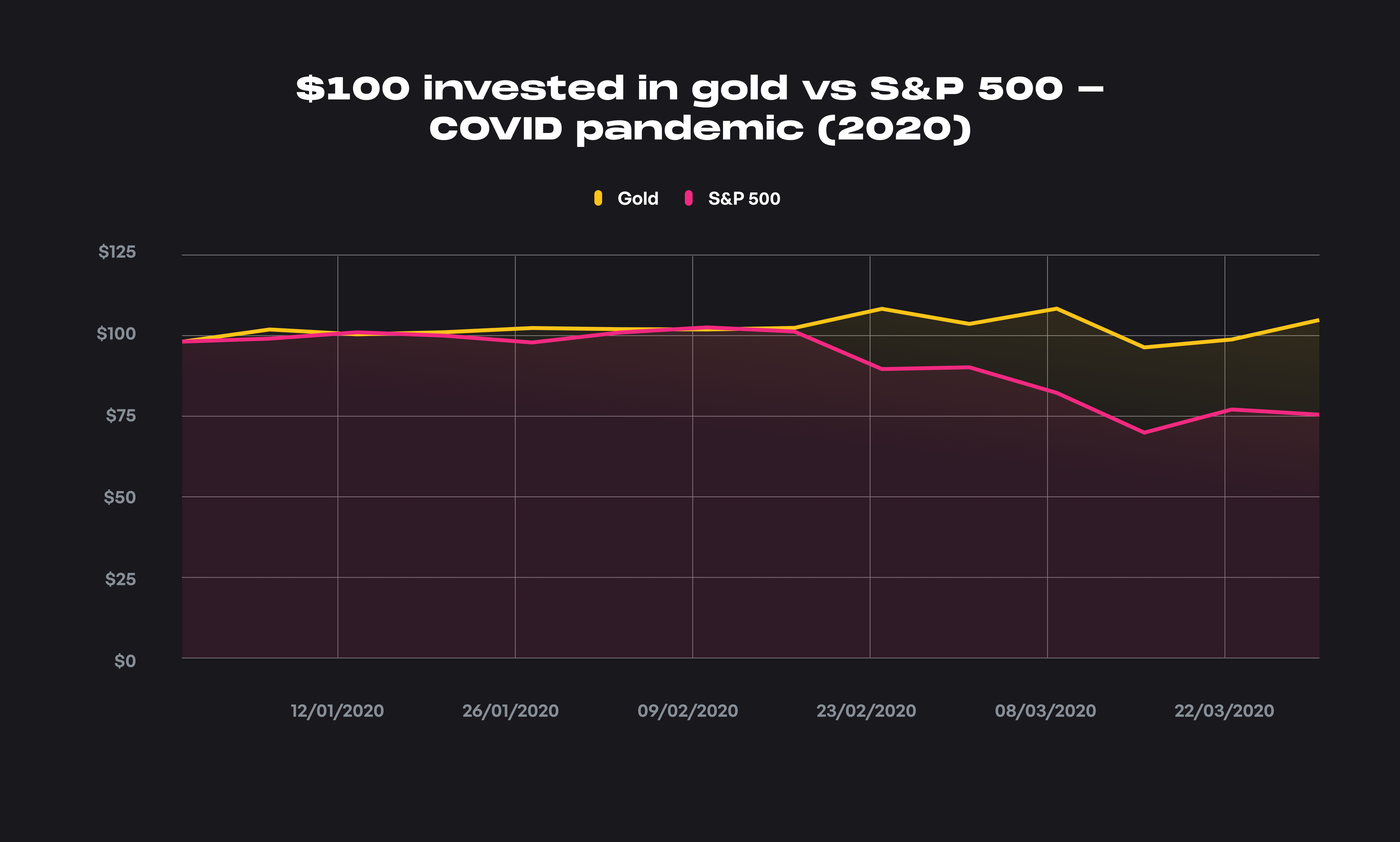 We can also further look at the returns for each asset class during each period of crisis. From the table and the above graphs, we can infer that gold performs exceedingly well during periods of crisis in the stock market and the economy. Adding gold to your portfolio could help you navigate sudden downturns in the stock market, thereby reducing the volatility in the dollar value of your portfolio.

Some sources include silver as a potential alternative to gold or an addition to the commodities component of your portfolio's asset allocation. Let's take a look and see what the data has to say on whether silver is a valuable addition to your portfolio. 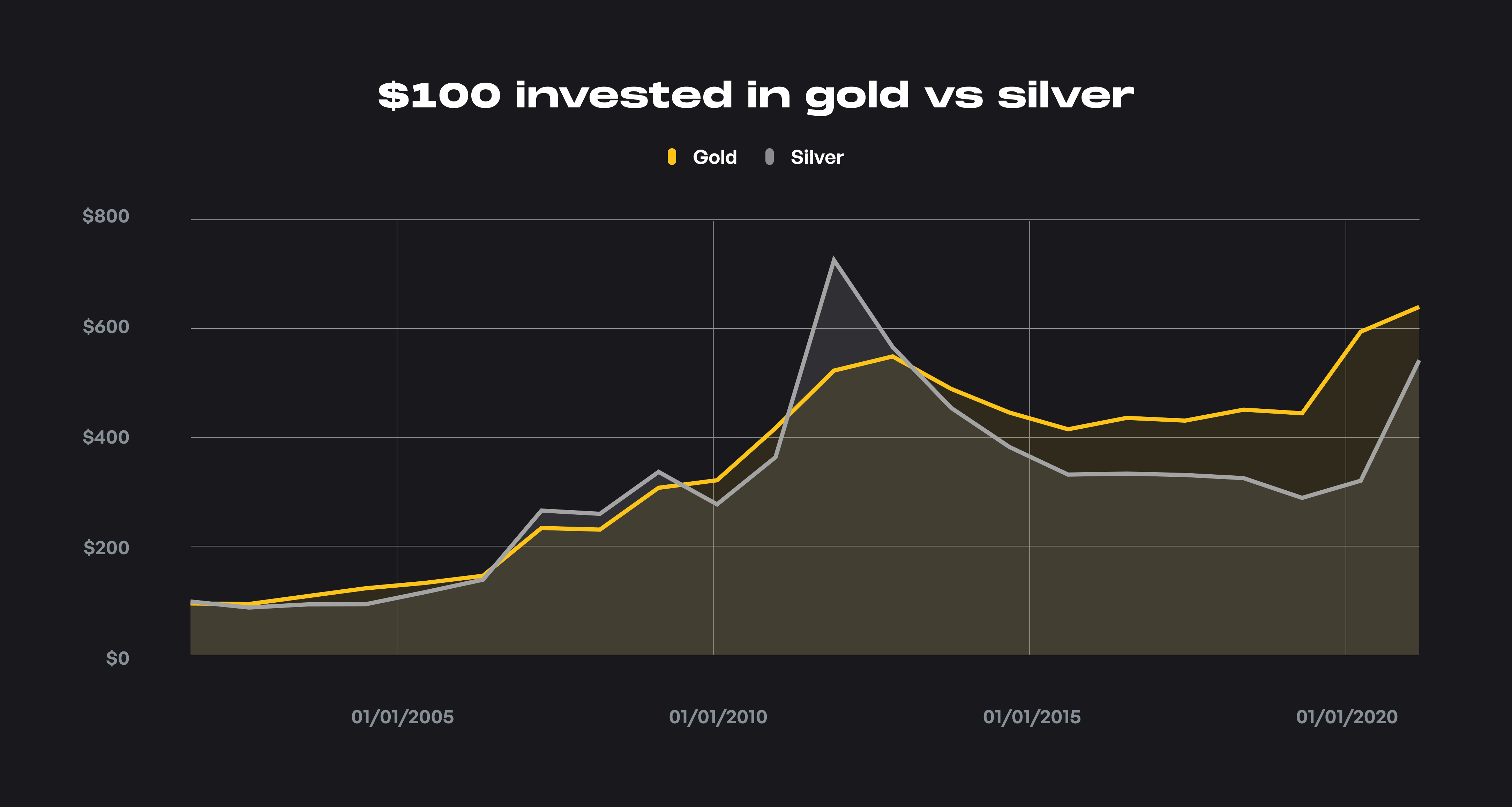 Below is a table showing the returns and volatility of gold and silver over the last 20 years to see if silver is worth adding to your portfolio on a risk-adjusted basis (volatility adjusted). As the data shows, silver has a lower CAGR with higher volatility. Silver also moves in correlation (86% correlation) with gold, which means that silver prices generally follow the same patterns as gold prices.

This analysis shows that silver as an asset, at least for now, may not add much in terms of diversification and returns for your portfolio. At least in the last 20 years, silver has had higher volatility, lower returns, and a very high correlation with gold.

Holding gold in your portfolio

Gold can be bought as physical gold bars and coins and stored in a safe location. However, purchasing and holding large quantities of physical gold can be risky and challenging.

Fortunately, there are many alternatives like gold receipts, derivatives, gold funds, and gold mining stocks that you can invest in to get direct and indirect exposure to gold. Please do your research while picking an instrument through which you are planning to get exposure to gold, as each instrument has its pros and cons.