Behavioral Biases: How you can improve your saving & investing decisions

It is an acknowledged fact that we perceive errors in the work of others more readily than in our own.

What are behavioral biases?

To understand behavioral biases, we must first understand what a bias is: a disproportionate weight in favor of or against an idea or thing, usually in a way that is closed-minded, prejudicial, or unfair.

Behavioral biases are a type of bias that consists of irrational beliefs or behaviors that can unconsciously influence our decision-making process. These biases arise from our brain taking shortcuts while making complex decisions. This works in our favor as we can make optimal decisions quickly. Still, it can lead to a lapse in rationality and a deviation from the most optimal decision in some situations.

They are generally of two types:

Cognitive biases are errors that occur subconsciously in thinking that lead to a misinterpretation of information from the world around us. They are primarily caused by mental shortcuts (heuristics) that simplify complex information processing and decision making, societal pressures, and emotional (over)reactions to certain stimuli.

By understanding the cause and effects of the major cognitive biases and trying to think back to situations in the past where you might have acted on these biases, you can improve your decision-making abilities in complex situations.

Emotional biases distort cognitive thinking and decision-making abilities due to emotional influence. Emotional biases result in us taking action based on feelings and intuition instead of relying on facts, research, and data. These are harder to identify and correct, but you can develop an intuition around choosing the best possible decision with time.

If you love podcasts, you can check out this episode of Ask Maybe where we discuss behavioral biases, our favorite biases, and how to combat them.

Knowing the various cognitive biases (especially those around helping you save and invest better) can help you make the optimal decision in complex situations involving money.

The anchoring bias is a cognitive bias that causes us to focus and rely too heavily on the first piece of information we encounter on a particular topic. A general example of this bias would be in the real estate market, where a broker might show you houses that are priced extravagantly at first and then take you to one that fits your budget.

Here the prices of the expensive houses serve as an anchor, causing the houses that were shown to you later (which fit your budget) to seem like a great deal. 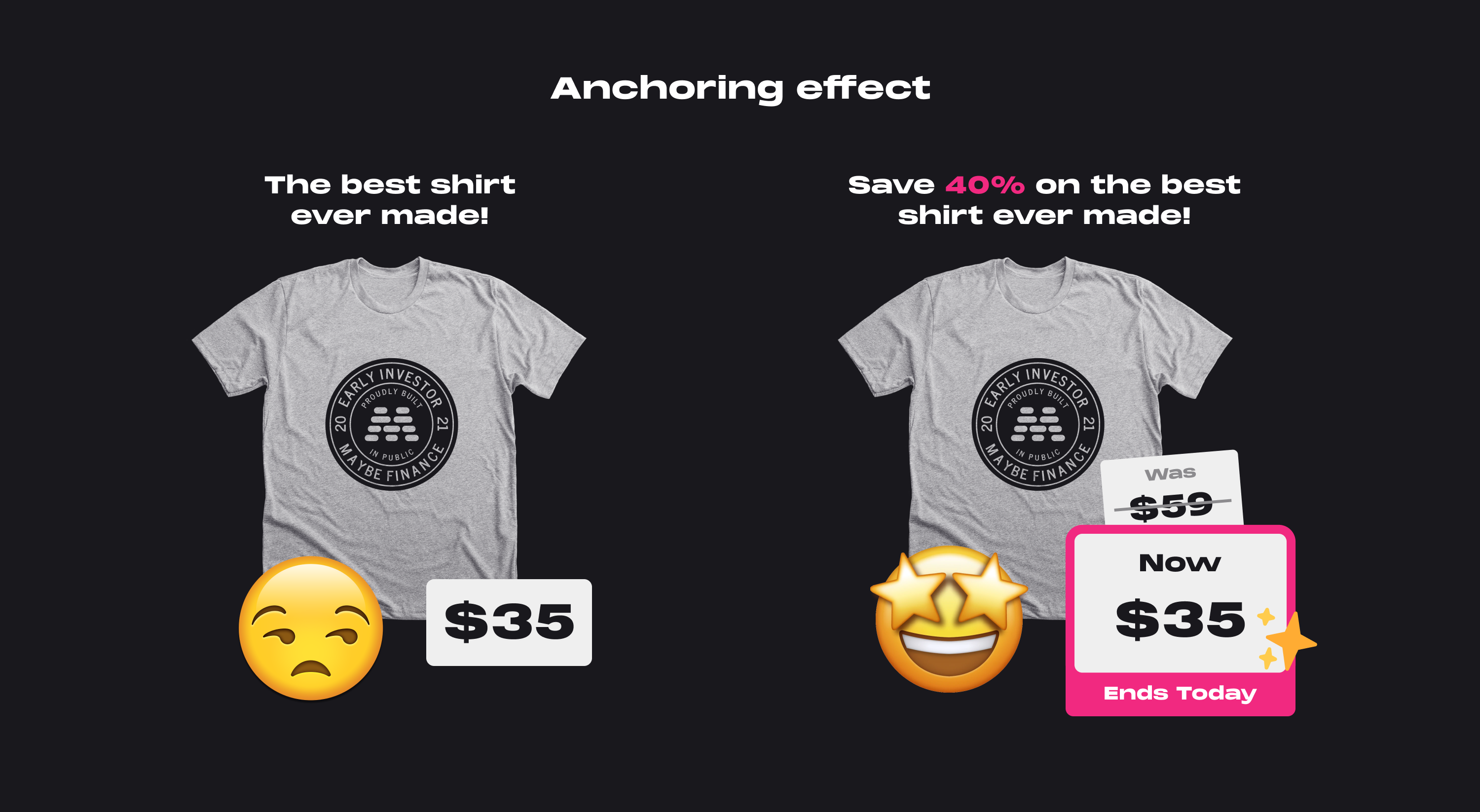 Anchoring bias in saving and investing

Anchoring bias can lead to some sub-optimal decisions, especially regarding money. There's no way to eliminate this bias. However, there are specific steps we can take to overcome it.

The bandwagon effect (also known as herd mentality) is a cognitive bias in which people do something primarily because others are doing it, sometimes even overriding and ignoring their long-held beliefs. Some great examples of the bandwagon effect are the financial bubbles (sub-prime mortgage crisis, dot-com bubble), where people follow others regardless of whether they understand the risks involved. 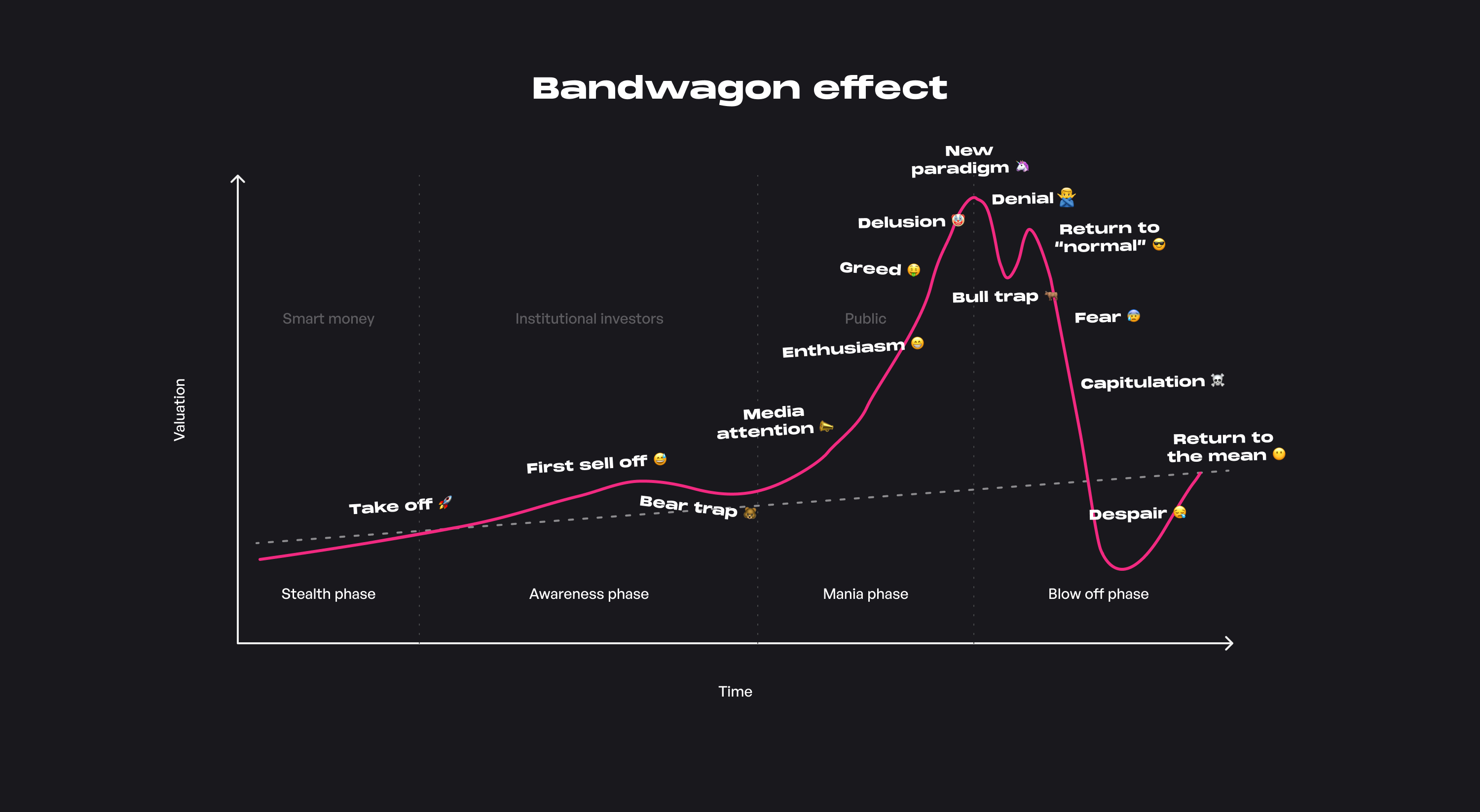 Bandwagon effect in saving and investing

Even the intelligent investor is likely to need considerable willpower to keep from following the crowd.

Overconfidence bias is an emotional bias in which a person tends to have subjective confidence in their decisions that is much greater than the objective accuracy of those decisions. It's the tendency of a person to overestimate their abilities.

A simple example of this can be observed in a survey of 161 students in Sweden and the United States, asking them to compare their driving skills and safety to other people's.

This survey notes the general tendency of humans to overestimate their abilities and skill compared to the population set. 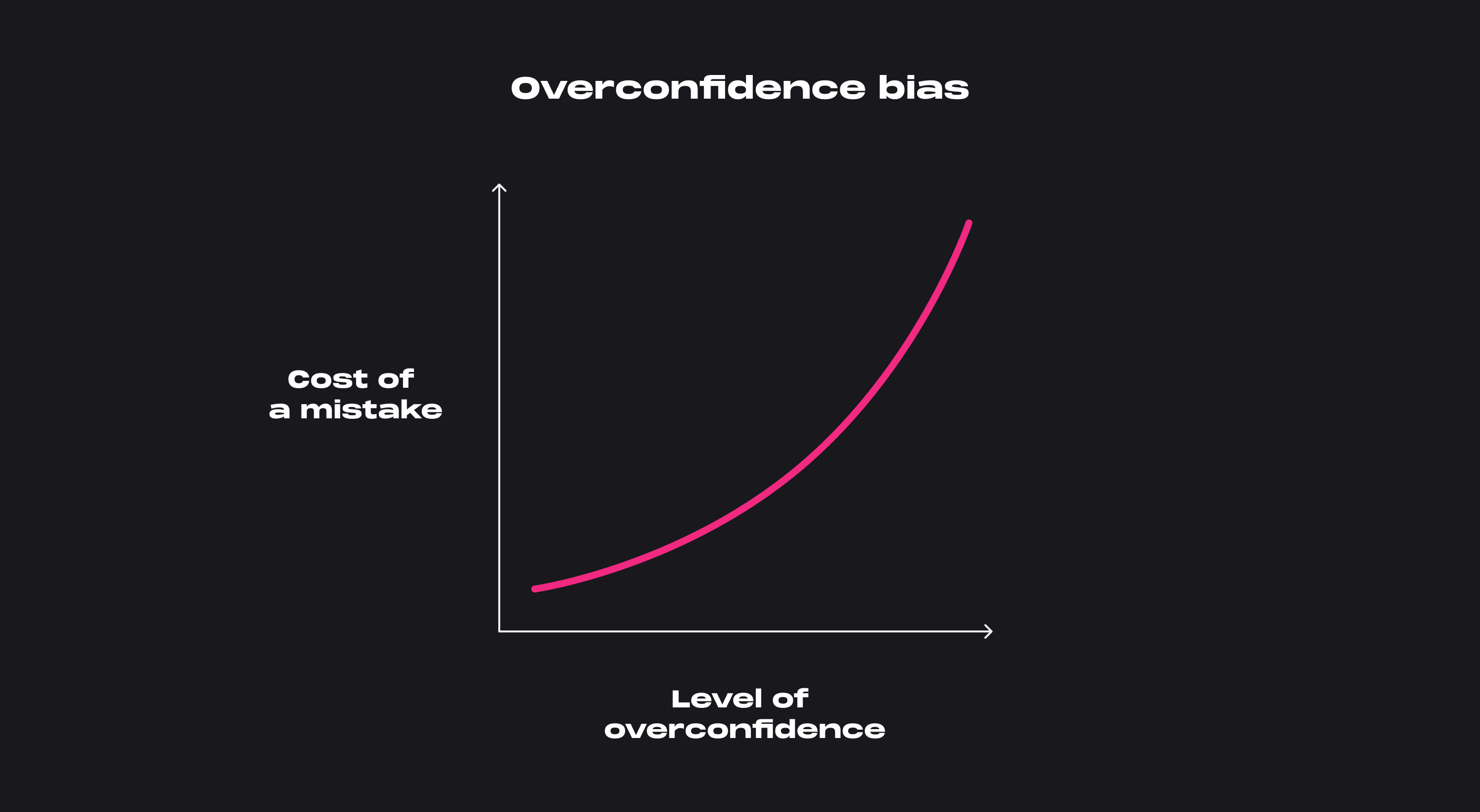 Overconfidence bias in saving and investing

The seersucker illusion is a cognitive bias in which people become overly reliant on expert advice. This bias is seen primarily in media, business, and finance.

The seersucker illusion in saving and investing: 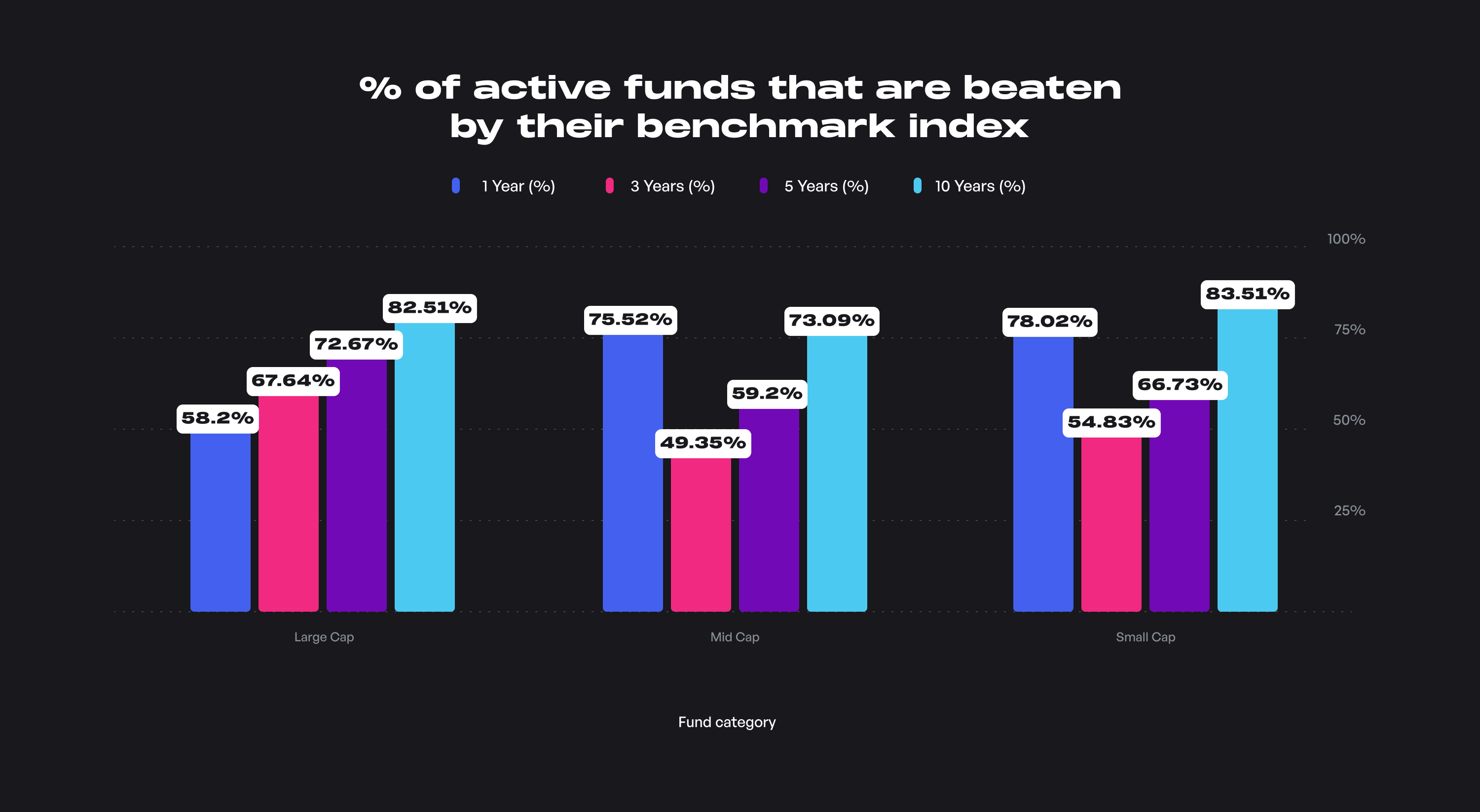 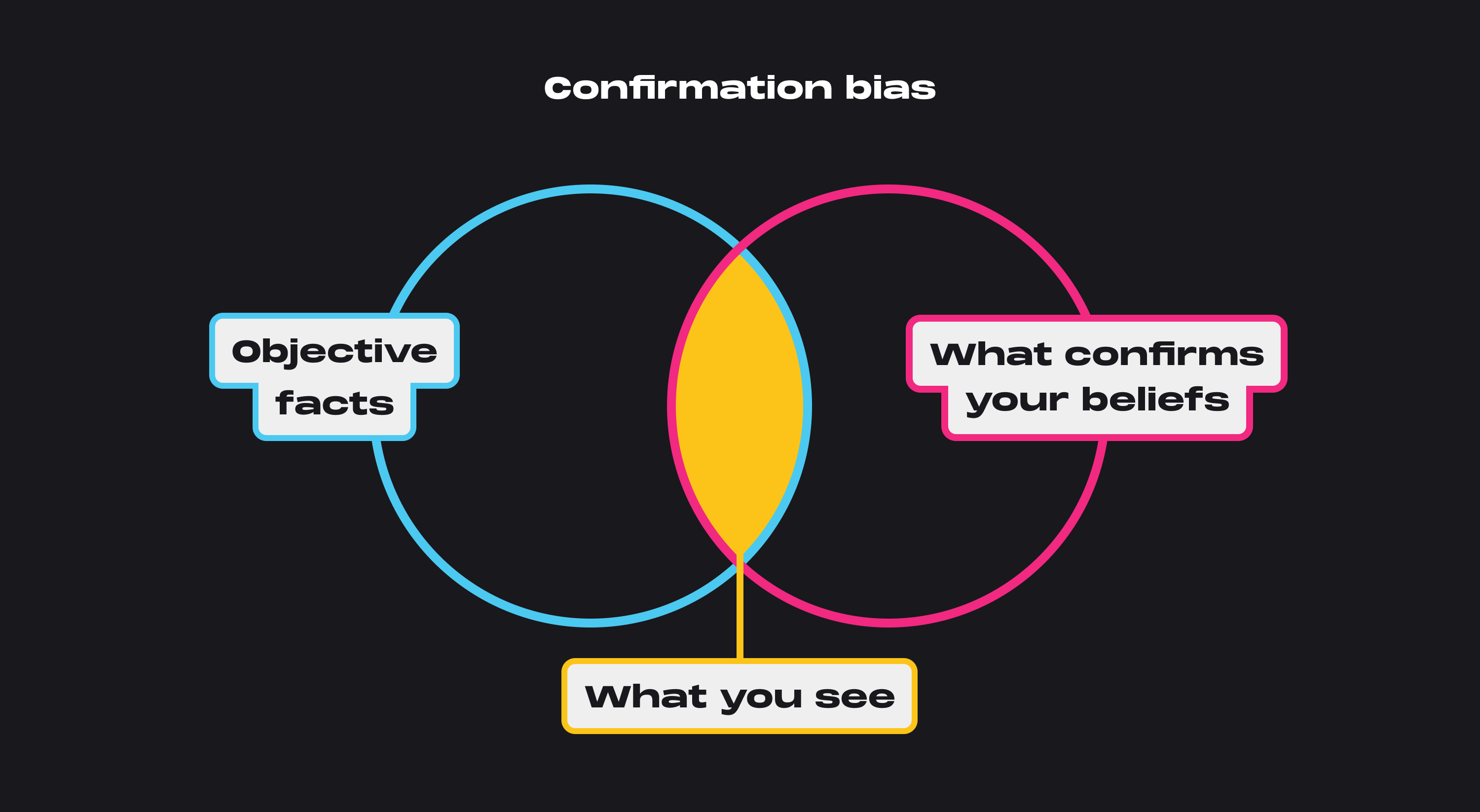 Confirmation bias in saving and investing 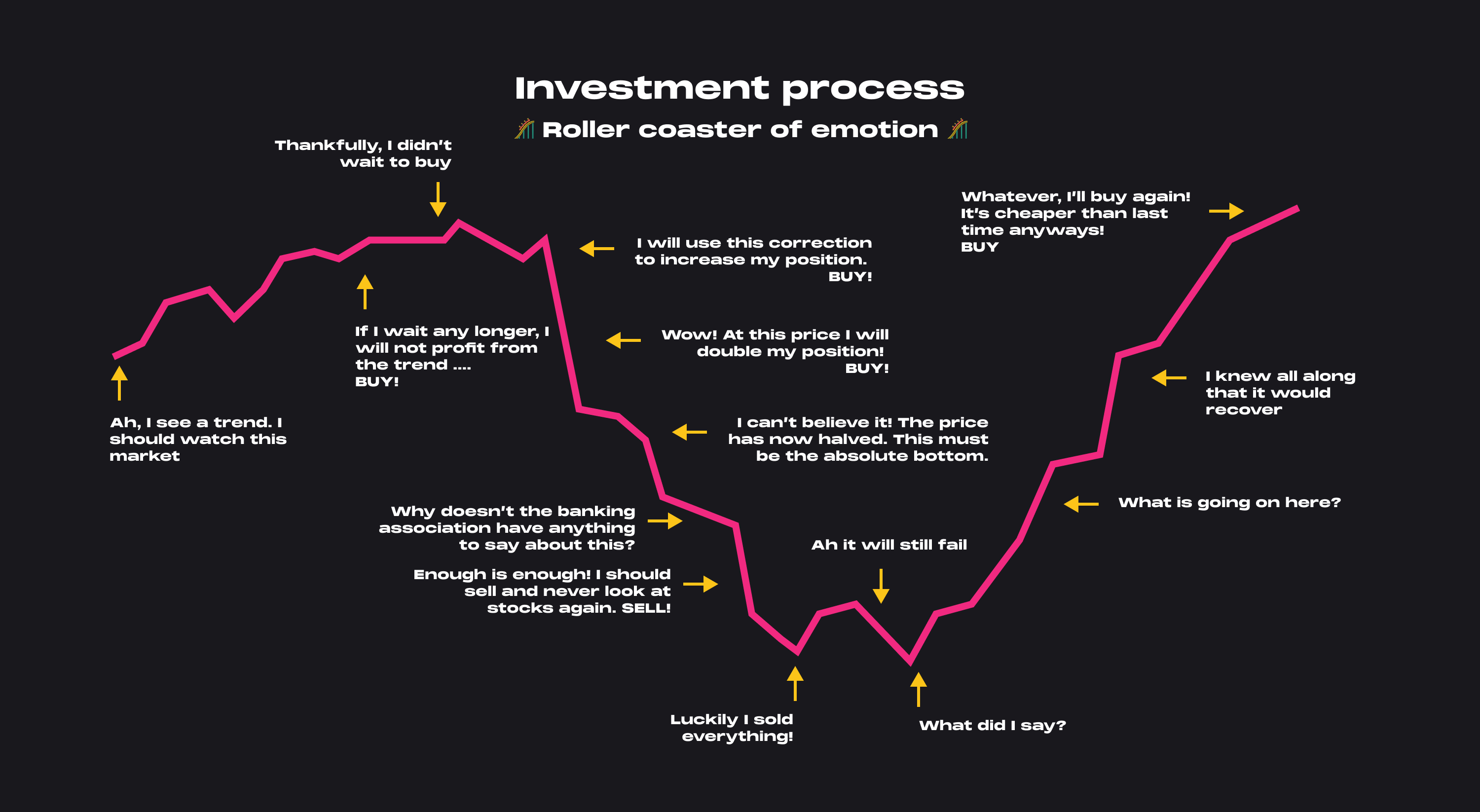 Cognitive biases play a significant role in the decision-making process, especially when we have to make complex decisions with high stakes quickly. You cannot eliminate them entirely, but you can take steps to mitigate them, especially in monetary decisions.

The most crucial step is the awareness that cognitive biases exist and that they inhibit your decision-making abilities. Then you can follow the recommendations above for specific ways to combat these biases.